I have discovered another hobby to add to the already ridiculous list!  Hooray!

It’s gardening!  Veggie gardening, to be more specific.  If you know me in real life, you’ll be sitting there going well duh, it’s not like you’ve been talking about anything else besides your freaking garden for like the last month, but hey.  The good people of the interwebs haven’t had the chance to be overexposed to me jumping up and down, eyes maniacally gleaming, squealing “MY BABIES ARE FLOWERING!!!” yet.  My friend Death is an extremely skilled and creative gardener, and she got me into it and has been watching and helping and guiding me (and giggling at me from a safe distance), and I now see why just about every retiree/wanky eco-family/school with ANY non-tarmacky ground is really into it.  It’s ridiculously calming and enjoyable and nowhere near as complicated as I thought.

First we had a massive trip to Bunnings, testing both our Tetris skills and the structural integrity of Death’s car.

Then in the front yard, I used my new mattock to clear out all the manky grass, then dig down through the soil to churn it up until it became sort of fluffy and edible-looking.  The grass went in a pile on the veranda so that it would dry out and become all innocuous.  It sounds quick here, though in reality it took a whole afternoon mostly because I’m not the Hulk, but I did it nevertheless, and by the end of the afternoon I felt like I had the hang of how to use a mattock with relative efficiency.  I now feel confident that in the event of the zombie apocalypse, that mattock could get me a few extra minutes.  Then one of my housemates helped me carry the rotten old bookcase out the front that’s been mouldering out in the back yard for however many millions of years, and I just kicked the back out of it and used it as a raised bed.  The shelves got propped together to form another raised bed behind it.  Behold! 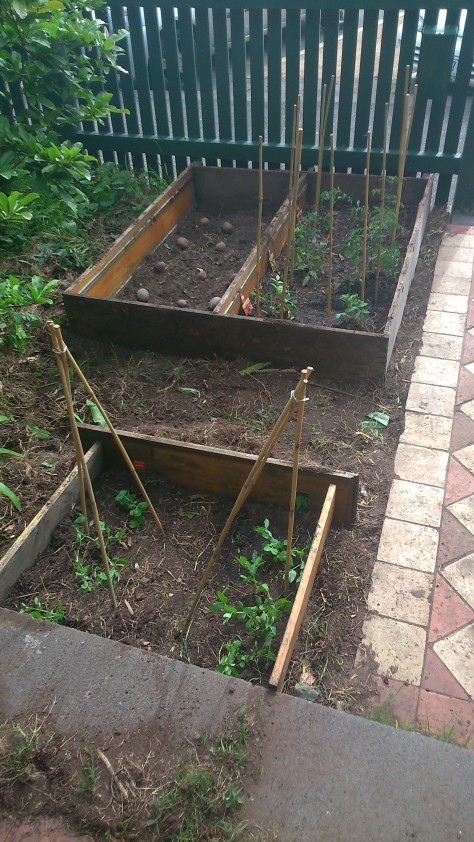 MY BABIES!!!  Back when they were babies… *tear* 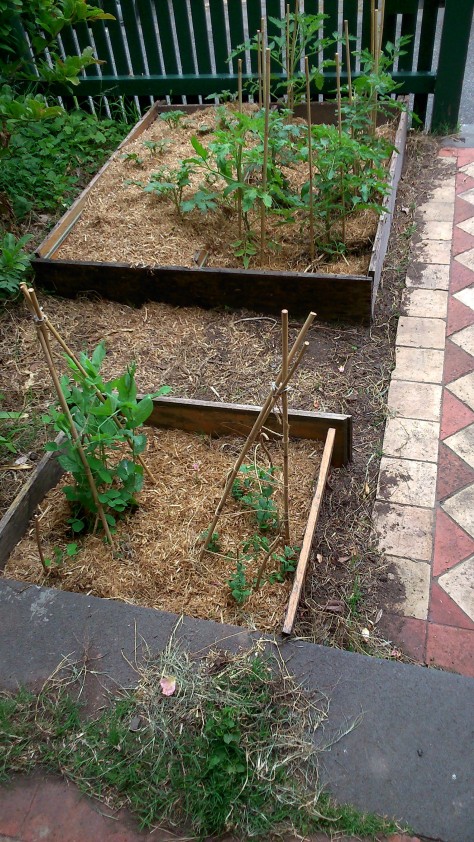 On the top left are two types of potato, on the top right are five heirloom tomato varieties (tigerella, red dwarf fig, green zebra, lemon drop and mortgage lifter), and then at the front are snow peas and normal peas.  As the potatoes grow, you pile pea straw around them and they break it down into soil.  The higher you pile, the more potatoes you get.  Death likes to grow them in cheap laundry tubs from Kmart with a hole bashed in the bottom for drainage. Neat and productive!

The peas may look a little stunted in the second picture, which is mostly because while the snow peas chose to put their energy into growing tall with big leaves, the peas put theirs into, well, peas.  Like these: 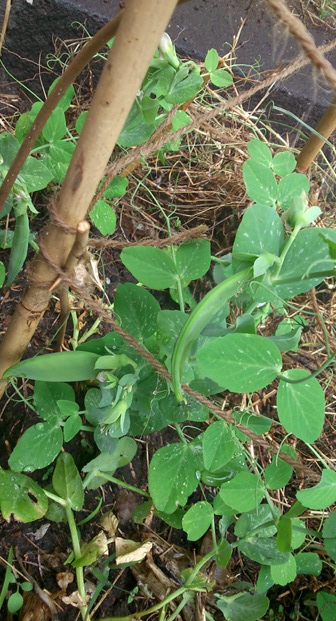 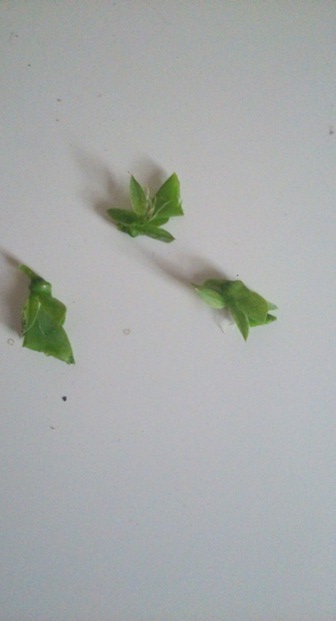 After.  Except then I ate those bits too.

My tomatoes are also starting to fruit!  They’d probably be a bit more on their game if Melbourne could maintain a solid run of warm-ish weather (honestly, it’s two weeks away from summer and it’s been cold and rainy for the last two or three weeks)  Efforts to pollinate them with a paintbrush are somewhat hit and miss (maybe I need to put on some 70s music for them?  Handcuff them? Play them explicit videos of other tomato plants pollinating?)  But at least so far the green zebras and the lemon drops have started to get the message: 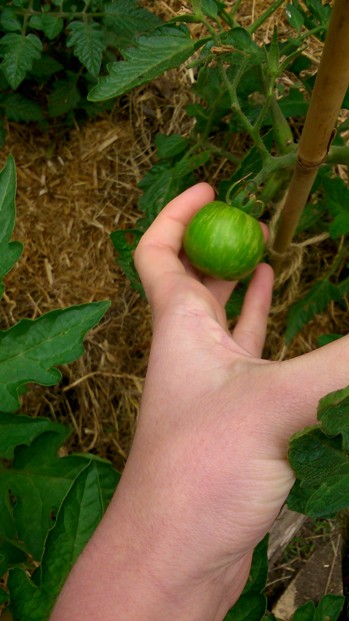 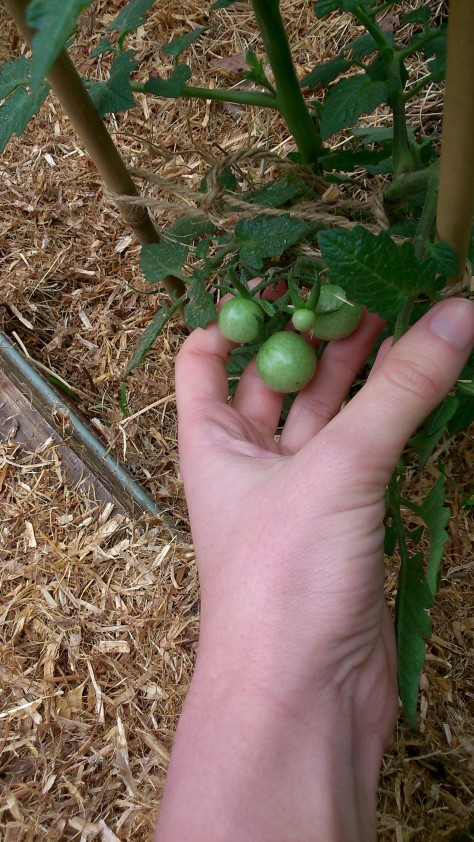 The lemon drops will get a little bigger, but turn yellow.

Out the back there’s pretty much only one spot that’s not concreted and wasn’t already being used for something, so I pulled out the stubborn, unfriendly grass that lived there, tilled it up, added a little blood and bone (to the delight of the local cats) because the soil’s not as nice as it is out the front, and then planted some pumkins and  some curious plants that came courtesy of Death’s odd mother called ‘tree onions’, which apparently produce edible onion-like things at the top rather than under the ground. 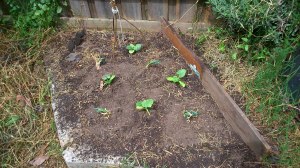 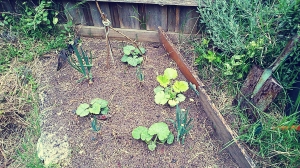 And again only bigger now.

The tree onions have begun to develop buds at the top, which release these sort of tentacle things.  I have no idea what they’re doing… 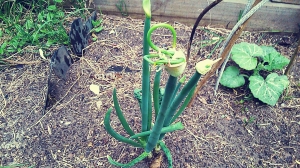 “Taking over the world, puny earthling!  Soon I will be invincible! Mwahahahahaha!!!”

Not turning into onions yet though, that’s for damn sure.  In the meantime, I have some herbs to content me also, which look faintly wanky yet fetching in their assortment of pots on chairs and whatever outside the door to the kitchen.  Tasty and convenient!  I have taken two photos with appropriate hipster-filters: 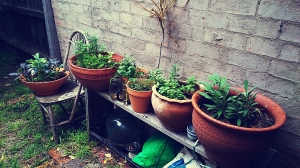 Only it was all dark and rainy this arvo so the filter didn’t work so well. 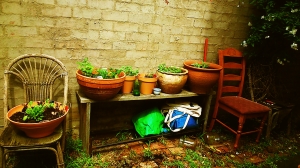 The photo from just after I planted was better for hipsterlicious instagrammy glory.

Ermergerd they’re on, like, chairs and stuff in like, non-matching pots. Does it count as wanky if it’s totally unintentional?  If I literally just used random old crap we had lying around because I couldn’t be bothered buying stuff?  And then took a photo with a silly filter for giggles and then realised OH GOD THIS LOOKS SO PRETENTIOUS.

And for the final twist in the tale, I chucked an old potato I found last time I cleaned out my kitchen cupboard (it had grown legs and possibly developed intelligence and was trying to escape) into a big pot with some compost.  Look what happened next: 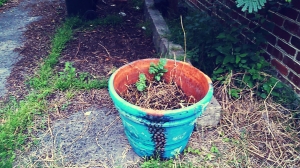