Which is mostly to what my lack of bloggery lately has been due.  Also partially to it being very hot again.  The sewing machine and the iron just don’t go on when it’s over 32°C as a matter of principle.

But a lot of singing is being done because it’s that time of year when you’ve got to start thinking in competition mode, and I intend a sort of merry sweep through as many of them as I have the time/energy to do properly.  I have some absolutely scrummy Wolf lined up for the first cab off the rank, then it’s going to be aria central for a while; if I actually learn any arias that is.  I’m not renowned for being the most aria-obsessed soprano who ever lived, so I begged some suggestions from my effin’ awesome teacher this afternoon, who started with: it’s better not to leap into the big warhorses, it’s best at your age to start off with smaller simpler stuff; and then promptly rattled off some suggestions including some Lucia di Lammermoor and Peter Grimes.  Did I hear someone say simple?

Chamber’s still my happy place, so I have some stuff in a concert tomorrow – Shepherd on the Rock (the appropriate response is to chuck out some horns and bang your head around – it is unassailably awesome), some Spohr, some Roussel, and some Michael Head.

Now, don’t let me get started on Michael Head. Oh whoops, I am started, and now I’m probably going to offend somebody, but hey, this is my blog. His parents should have named him Richard.  His writing is so twee and sugary and pointless that it makes Dulcie Holland look like the next J.S. Bach. IF YOU’RE GOING TO PUT SO MANY GRATUITOUS RALLENTANDI AND AD LIBATUM-I (ad labotomy more like, in this case) INTO YOUR MUSIC, THEN WHY BE SO DARN NITPICKY ABOUT NOTATING EVERY INANE LITTLE RHYTHM? By default anything he writes is So Not My Fach.  So why am I bashing my larynx against this fluffy, poorly-constructed brick wall?  Because societally-conditioned-nice-girl brain was first to the consent buzzer. Now we see how feminism and singing intersect… But that’s another story.  Now I’m doing this damned piece and my [admittedly lovely] instrumentalist mates get to be on the receiving end of what happens when sopranos step outside their fach, and it ain’t pretty.  Once I’m done with it tomorrow I am no kidding going to take the sheet music out to the backyard and burn it.  Probably involving some kind of feather-waving, goat-sacrificing ritual so that it can never come back and make me sing it again.

…Unless I keep it to use for sewing patterns, that is.  Despite having the sewing machine off I’ve still been doing a lot of sewing, just mostly by hand while watching Buffy downstairs because I think it’s still below 30°C downstairs and my favourite housemate and I went halfsies on a box set of Buffy for Christmas.  So far I’m about a third done with an acetate pleated tulip skirt made from some acetate I picked up at the UMSU Theatre garage sale, and it’s going to be very poufy at the top but sort of nipped in at the bottom like an upside-down ’80s bubble skirt (I know it sounds ugly, but this is just like when the girl behind the counter at the deli at Vic Market questioned me buying 150g of goat cheese for a cheesecake,  TRUST ME. It’ll work, and it’ll be gloriously A/W 2013.  The cheesecake was great too, if you’re wondering.  I can’t find where the original recipe I used went, but this one’s fairly close, the base of mine was mostly butter and digestive biscuits… or what was left by the time I made it. They’re too moreish for their own good.  Damn it, now I want some, but it’s too hot/I’m too lazy to ride to the supermarket). 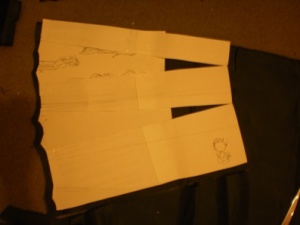 What is the top doesn’t look like it in the pattern… and a bad photo of the pleats and the waistband.

Also I’ve been working on a toile for a pair of 18th Century stays as a totally gratuitous romp to refresh my mind after too long staring at my Nixon in China score.  Also to improve my hand sewing.  I look at amazing blogs by incredible people like Before the Automobile and Diary of a Mantua Maker and I get all inspired and then my hand sewing is more crooked than a medieval Pom’s teeth.  But the shape is generally looking on track and the fit (as much as I can extrapolate at present) is good, and also I guess there aren’t many people who memorise Nixon and make stays.  Even super wonky stays.

For your viewing delectation, my abominable hand-sewing.

Once again, check out my illustrations in the next edition of Farrago, available from A Fair Few Places on the UoM campus, and COME TO CLASSICAL REVOLUTION AT OPEN STUDIO IN NORTHCOTE TOMORROW AT 5!